I have been doing a bit more research on marquetry and inlay. Most of the marquetry pieces I have seen have had the veneer pictures cut out of the back ground veneer first than attached in before the whole veneer piece is glued to the substrate material.

Now for the design I was going to do this was going to be a bit problematic. Since I had a fair few veneer pieces to connect to one another. I thought that you would not want to attach the marquetry veneer in first while the veneer pieces have not been glued down to the substrate. At first I thought this would be totally messy and accidents could happen. But this is how marquetry is done.

Normally I had thought one way of attaching the marquetry to the paneling was to veneer the whole substrate than draw the pictures on( first making templates) and than cut them out using knives and gauges etc. Than use the templates you used to cut out different colored veneer and place them into the hollowed out sections. This my friends is not called marquetry this is called inlay. They both have the same similarities but are completely different.

By the looks of things through my research into the marquetry books that I have bought this is not the case. This is not proper marquetry. Yes marquetry is the formation of different coloured veneers put together to make a picture but what I'm saying is this is not the proper process of marquetry.

I have been looking at a marquetry book that goes into depth of the double bevel method. What this is is that the veneers are cut on angle which means only one piece can be cut at a time. When the male veneer piece is placed into the female section ( hollowed out section) due to the angled veneer piece it will create a tighter more precise fit.

If I was to do another project like this again or the same piece again I could veneer my panels up in one go but still do the marquetry after wards but still follow this double bevel method.

I would have two different types of substrate. The first would be the main core. The second would be the outer layer substrate. The outer layer substrate would have the main back ground veneer laid over it. The outer layer would only be about 3mm in thickness. This thickness would allow my self to still do the double bevel method. Now the .6mm veneer would be glued over the 3mm outer substrate. Once all the veneer pieces are glued into the outer layer panel it would than be glued to the main substrate panel. Now remembering that the layers would need to still be alternating in grain direction and If I did this to the front face I would also need to do it to the back face to make the panel more structurally sound.


You use a fret saw to cut the pieces out but you can use the scroll saw. Although this process would only be good for certain sized pieces. Most of the parts could be done like this for my piece but the larger panels this would not work for.


There are three different types of marquetry methods from what I have seen. I may find many other methods with the more research I do.


Now I can not do this with my veneer. Since the major back ground is already glued to the substrate. What I should have done is cleaned all the veneer joints connected it together with veneer tape than organized the pattern and place the windows in the veneers and connect the inserts to it before pressing.

I would first need to make a whole pattern that ran over all sections of the cabinet. Pattern would be drawn up to scale and shown on drawing of cabinet. You would basically follow a textiles pattern. 2D pattern layout from 3D parts.

Method 2: The fret method which is basically the double bevel method that I explained they share the same main foundation methods.

Method 3: The pad method uses the same principal from the fret method but a pattern is attached to the veneer. Usually a number of different veneers are used under the pattern. This is so by the end when the veneers are cut out you will end up with 2 different contrasting designs that can be constructed. 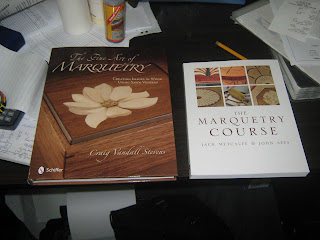 Lol looks like I need to buy some books on inlay than since I wont be doing marquetry for my final piece. All well will still be using these for reference. Some of the processes with finishing and toning with the hot sand trick and many other things I will be using with the inlay for my final piece. Many things from marquetry and inlay cross over.

http://www.artmarquetry.com/books/art-bk11.html I found this link on line. Even though it address more towards a book and some history on inlay it explains the difference between inlay and marquetry. Even though they have similarities they are completely different.

Marquetry and inlay the difference:

"Marquetry is the art of making patterns or pictures predominantly in wood veneers (but metal and shell have also been used) and gluing them directly onto the surface to be decorated. Inlay has traditionally been a composition of shell, metal, stone, and tusk (with wood to a lesser degree) that is glued into a cavity that has been hollowed out of the surface. The inlay is then sanded flush. Both techniques have their specialized tools and jargon, and, although some similarity between the two exists, this book will not deal with marquetry" quoted from the above website.


What I want to achieve would really fit more under router based inlay or free hand based inlay. I think this is the problem that I had I got a bit confused with the terms marquetry and inlay.

I came across this you tube video on router based inlay. This is from the guy from the sight called the wood whisper. Now I mentioned him in one of my earlier posts.


Now with my cherry blossom design I need to make it simple. meaning There are only a variety of different router size bits ( would be using straight cutters). Plus you don't have a huge control over it compared to if you were doing marquetry.

I was planning on doing the designs quite simple any way even if I did marquetry. With this I didn't want to create huge amounts of complex detail.