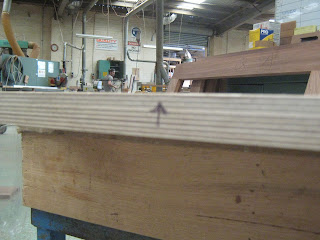 Place an arrow in the direction as to the face you sand first. This will show you what face to end with when finishing sanding. This is because when sanding plywood you need to take off even amounts on each face. Basically what you do to one side you do to the other. 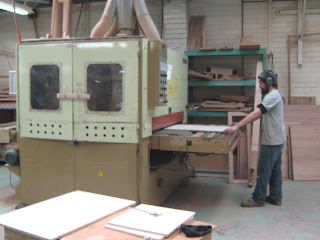 The laminated boards for the sides were reading at 23.7mm. I decided to start at 24mm encase certain other sections of the board were higher or whether the drum sander was out of calibration. 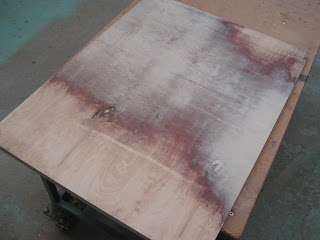 I defently knew I was going to blow through the outer layers since I had to sand down to 19.8mm. This is the finished size thickness the panels needed to be before veneers were laid. When veneers were laid it would take the thickness up to 21mm which are the sides finished thickness.

It took a few passes since I was only taking off .5mm each pass. This this case use a push stick since I couldn't afford it to get stuck in the sander and cause ripples in the board. 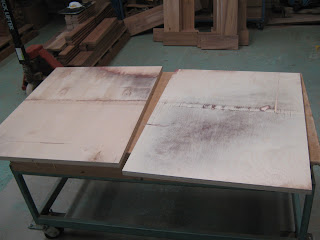 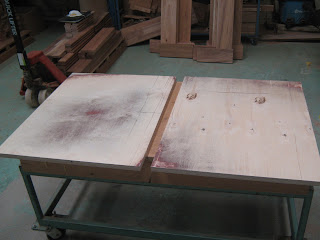 The top layers of the plywood were really good but I didn't think the middle layers were going to be so bad. Usually from finding out from one of the other work mates that usually to cut down costs they will place vic ash layers in the middle layers or use really crap birch. I couldn't sand down the inside layers of the panels before they got laminated because it would make them un even and not structural balanced properly. 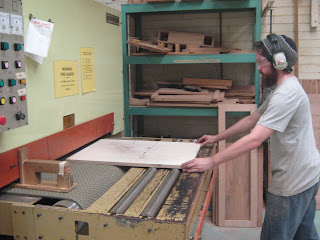 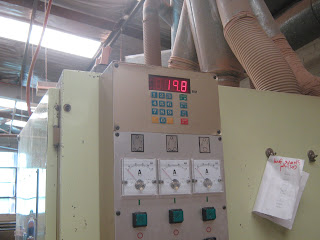 Finished size. Double checked with my calipers on the panels and they were reading almost the same. 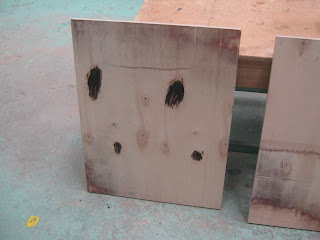 After sanding down to its finished size I had a lot of opened knot sections. I could not veneer over this since it would create sag. So I had to bog the holes up. I wanted something to bog these holes up really quickly so I used fiber glass bog. I just added more hardner so it would speed up the curing process but this meant that I had to work fast.

Spread the bog over generously than scrap back what is not needed. This dried within a couple of minutes. 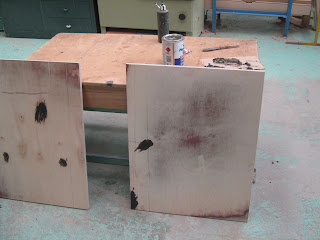 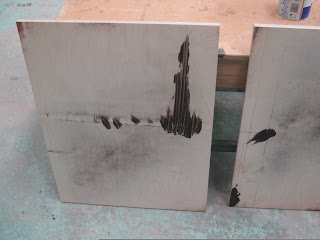 There wasn't that much to bog up which was good. I didn't want to take any more off the boards in the drum sander so I just sent them back through the drum sander on both sides at 19.8mm again. You don't want to use a orby since you will create a shallow drop in the board where the fiber glass is. As well I added a dye to it. 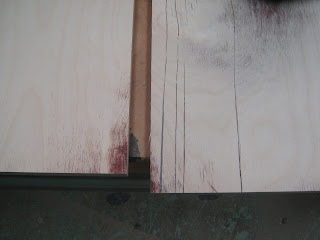 Some of these bog hole sections will go away since they are located in the waste mark sections that will be cut off when the veneer has been pressed to the panels. 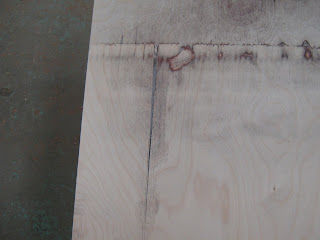 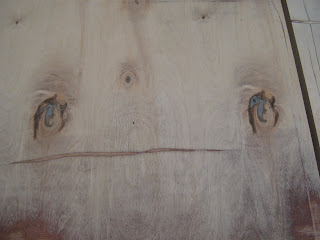 Clean up was very quick and neat it covered up all the holes that I wanted filled up. These side panels are now ready for hand veneering.

Sadly I was hoping that I would blow through the next layer which would be the reference grain direction I would want when laying the veneers. Now the veneers will be running in the same direction as the top layers. I'm not too fust about this since The top layers were already thin so it shouldn't make that much difference. 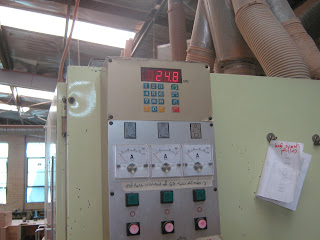 The top carcase panel that I had cleaned up this week had to be sanded. I needed to sand it down to 24.8mm since this was its finished thickness before veneering. When veneered it would take ti to 26mm. .6mm veneer on each face. I had to sand off even amounts on each face to keep the panel structurally sound (balanced). The panel started out as 26.8mm thick so I needed to take of 2mm, 1 mm to each face. I did two passes at .5mm to each face. 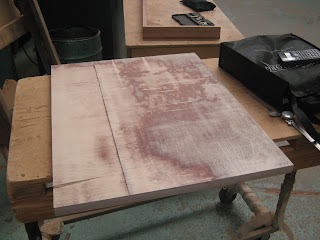 There were some high spots on the panel also I have noticed that each layer is not totally consistent in thickness all round it its self. This wont matter that much. I noticed that at each point there was a differing thickness of about.2mm. So I ran it through the drum sander again taking .1mm off each face. This cleared it up making everything even. Also noticed that the sander was out of calibration a bit which was another reason why I had to do this. 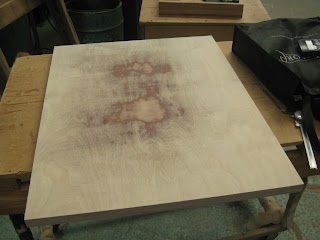 There wasn't any sections that I had to bog up like the sides. 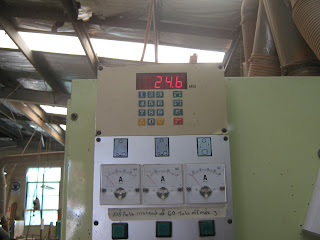 Finished thickness on sander even though it came out at 24.8mm so the sander was out of calibration by about .2mm 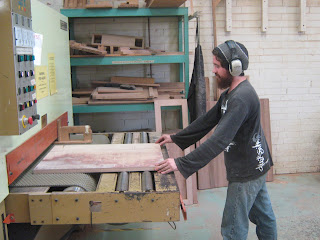 Placing through drum sander was using a push stick so it wouldn't get caught in the middle of the sander and cause ripples. 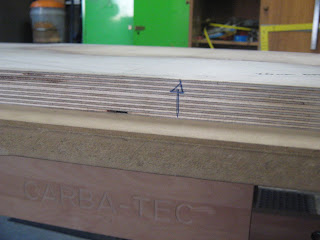 Again like the previous panel mark the edge with an arrow. This will indicate which side I started with when sanding though the drum sander.
Posted by Unknown at 22:56