Construction of base to bottom molds 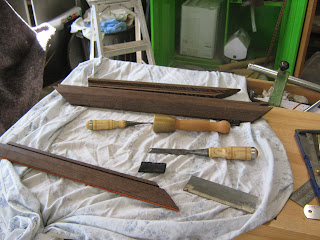 Some of the rebates had to be cleaned out since they had a bit of uncleaned waste left over from when removing the waste sections of the rebate on the panel saw at tafe. 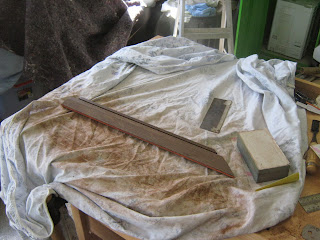 Most of the cleaning will be done with the cabinet scraper light sanding will follow after this. 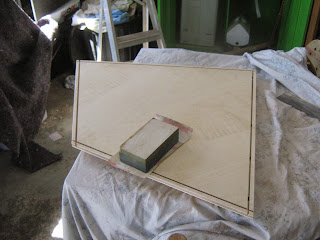 Breaking the edges of the base panel before raping the molds around it. 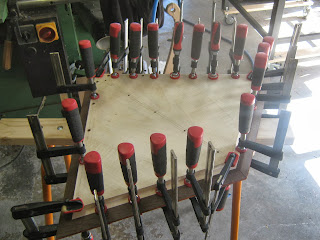 Did a dry run first to see how the molds would go onto the base. Making spline rebates really does help. Helps to locate the molds onto the base properly and helps a lot more when clamping/ gluing. Doing a try run is all ways best as it allows you to see what sections need tweaking before gluing begins.

Nothing more worse than having the glued applied and finding out that nothing goes together properly. 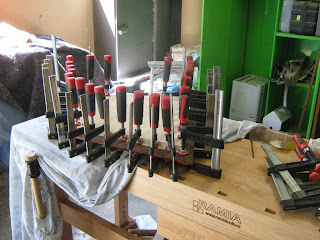 Also doing a dry run roughly showed me how many clamps I was going to use. Which was every clamp I had in the work shop. I prob did not need this many clamps but since it was an unusual shape and annoying to get effective pressure I figured the more clamps I had the better pressure I would get. 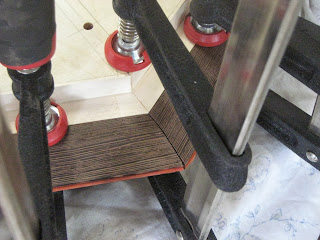 There was a slight gap in one of the joints. This was because one of the rails internal miter length was cut too short by about .5mm-1mm. This meant when it came to gluing up I need to spread out the discrepancy so it would not be highly noticeable. The polyurethane glue would expand and cover up some of the gaps but I wanted to get the joints a best as possible. 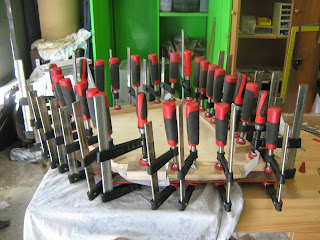 Even if a dry run goes all well some times it doesnt go well the second time when the glue is applied. I was having trouble with the front mold in connection to the edge of the base. I kept on having a gaping. This was due to not being able to obtain an effective clamp pressure also the spline rebates from the mold and base were not 100 percent lining up . The mold kept on wanting to tilt forward away from the base which in turn creating a gap. This gap was about .5mm-1mm. I will look at to fixing it after I see what the damage is when I have cleaned off the polyurethane glue. If it looks too bad I may place a paduke stringy inlay piece right through the whole joint to hide it but also to make a feature out of it.

When the door flaps are down the section is not seen and when the doors are folded up it creates a shadow over it so it might not be so bad. Also when the danish oil and wax is added it will make the sections even more darker and probably wont be as noticeable.  Since its a blond timber onto a dark timber it isnt that noticeable. If it was a light timber on a light timber than that would be a totally different story. 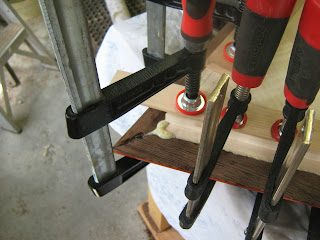 Polyurethane glue expanding and covering up any gaps. I placed glue in the spline rebate sections on the actual main rebate its self and in the miter glue joints. Next time which will be for the top mold I wont add as much glue I think I added a bit to much which will mean there will be a bit of annoying cleaning. 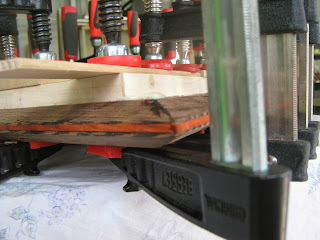 This is where the miter spline will be located. 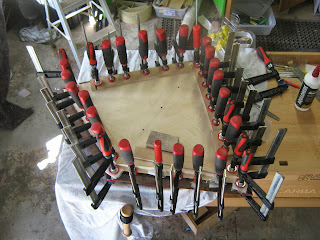 This will be clamped up for about 3-4 hours. It was good that it was a hot day since the glue cured faster which also was a bad thing since I had to work faster.

Clamping this was a bit cumbersome. I first had to place scrap blocks under neath to lift up the whole base so I could get clamps under it. After I had enough clamps so it was secure to move I had to move it onto 2 work horses where I was able to add more clamps. Once this was done I had to than move it back to the work bench, which was really heavy.

Lucky to the dry run I knew I had to do all this. 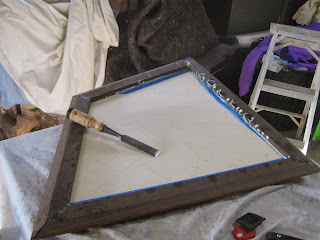 I placed blue painters tape down on the base next to the molds to limit the polyurethane expansion. I will need to get a skew chisel to get into the tight corners to remove the polyurethane and tape. 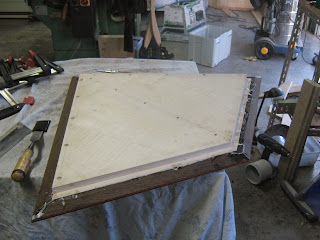 The next step is the long process of cleaning the glue off. I wont bother doing a really bit clean like sanding since the base is going to be still handled a lot in other jointing steps, dry runs etc. All I will be doing is removing the glue and cleaning the molds removing saw marks, steps etc.

The paduke stringy inlay will no be cleaned down to the very end when I'm about to place the first coat of oil on.